Man Dies From Falling At Heights 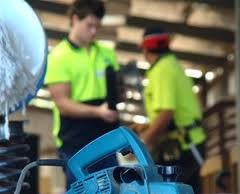 LATEST: The name of the McKechnie Aluminium employee who died after suffering a head injury in an accident yesterday has been released.

Michael Joseph Kane, 33, was seriously injured in a fall just before 5am at the business on Paraite Rd, Bell Block.

The father of three young children was taken to hospital by St John ambulance but died yesterday afternoon.

The Business, Innovation and Employment Ministry is investigating.

McKechnie Aluminium chief executive Pramod Khatri confirmed the accident happened in the foundry where scrap aluminium is taken to be melted down. "He was working on a platform and we think that he was trying to free some metal and in that process he has slipped," Mr Khatri said.

The man had been with the company for about seven years and staff working in the same area were yesterday given the rest of the day off.

"A lot of people who have worked with him in the company are in deep shock," Mr Khatri said. "Some have decided to stay on and others have said that they wanted the day off. We didn't want any further accidents."

EPMU Taranaki organiser Ross Henderson said his thoughts and sympathies were with the man's family.

"We would obviously have some deep concerns about how the accident occurred and whether or not it could have been avoided."

Senior Sergeant Thomas McIntyre said police were told of the incident about 10.30am.

"Because the injury is very serious we have been notified by the hospital," Mr McIntyre said.

He said police would assist the ministry in its investigations if required.

Thank you very much!

"I would just like to take the time to say thank you very much for completing the manual for us here at Skywave Communications Pty Ltd and over the weekend for us as well. You have saved me in particular a lot of time, which I would otherwise have spent updating our current and outdated WHS Manual. Thanks again and we look forward to doing business with you again in the near future."

The Lantana & Clearing professionals specialize in providing a non-chemical and low environmental impact solution to clearing Lantana and other noxious weeds.